Horizon Capital International “HCI” is offering an investment opportunity for its clients to obtain permanent residence in Cyprus or EU Citizenship.  HCI has developed a relationship with an outstanding developer with high quality residential products and a well committed, successful and professional team in Cyprus who will work with our clients in sourcing a suitable home.

Known as the Jewel of the Mediterranean, Cyprus is a small island located south of Turkey and to the Southeast of Greece.  Its strategic position at the intersection of 3 continents: Europe, Asia and Africa, has played a key role in shaping its history and in developing the island into a hub for trade and international business.  The official population is just over 1 million people.  70% of the population are Greek Cypriot with Turkish Cypriots constituting a 10% minority.  A significant expatriate community makes up the balance, with the biggest group of expats being British nationals.  Cyprus is endowed with a vast rich history with almost every region having a Roman ruin, a Byzantine church, a Crusader castle or an Ottoman mosque.  Being situated at the crossroads of three continents has given Cyprus the benefit of embracing cultural diversity from both the East and the West for thousands of years.

The island has a balmy climate with summers that last up to 7 months and mild winters with occasional rain.  Residents enjoy plentiful sunshine with close to 340 sunny days in a year.  The small island offers a wide variety of attractions and activities and is blessed with a scenic landscape of coast and mountains.  From skiing in the mountains of Troodos to swimming in the crystal-clear waters of the Mediterranean Sea, one has the luxury of being able to go from one extreme to the next.  It is home to seemingly never-ending beaches, voted amongst the best in Europe.  The Cypriots are famous for their warm hospitality and it is quite common for tourists to get invited into the local homes for a drink or even to share a meal.   Cyprus offers its residents a relaxed and easy-going, sociable pace of life with a high standard of living.  With its charming cafés, bustling restaurants, welcoming village taverns and vineyards that hold an array of wines, it is no wonder that Cyprus is such a popular tourist destination attracting people from all over the globe.

Cyprus has a stable and democratic economy that has managed to overcome the recent global financial and economic crisis.  Although Greek and Turkish is spoken among the locals, the English language is also spoken by the majority.  Cyprus is considered to be one of the safest European places to live with their low levels of crime.  The educational system is directly linked to the UK education system, permitting graduates easy entry into the top UK universities.  The standard of basic health care in Cyprus is excellent in both the public and private sector.   Private healthcare is relatively affordable and one of the reasons why many expats relocate to the island.

A major draw-card for many international luxury home owners is the range of incentives that one gets from the government, such as tax breaks and the opportunity to gain Cypriot permanent residence and/or an EU Passport.  Taxation in Cyprus is low and there is a high threshold before one starts paying income tax.  Additionally, there is no taxation on foreign income received in Cyprus or Transfer Duty Tax and if you are looking to invest in your family’s future, there is no Inheritance tax or Estate Duty Tax either.  Cyprus is part of the European Union, which in itself comes with many of its own advantages, namely offering you access to all EU member states.

Cyprus is a very attractive retirement destination for South Africans due to the combination of its mild climate, the wide use of English, the low crime rate, the low cost of living (The cost of living is 25% lower than the European average), driving on the left and the tax benefits.  Cyprus presents a prime choice for high net worth individuals who are looking for the option to either diversify their property portfolio by investing offshore or for individuals looking to secure their future and that of their families’ by gaining easy access into the EU. 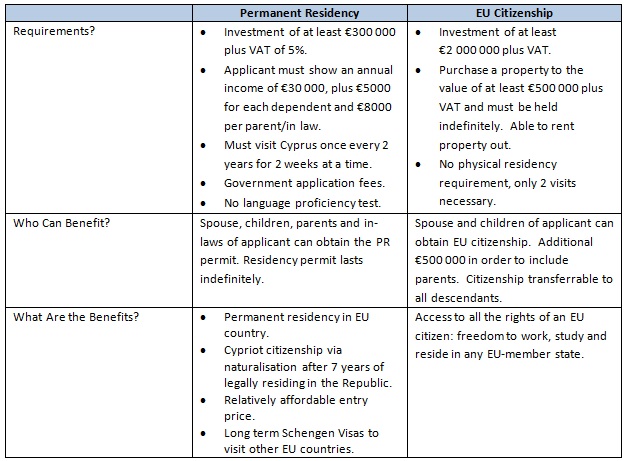 Brexit And The Bath Property Market

The Time to Diversify is Now

Do NOT follow this link or you will be banned from the site!