The state of a country’s economy influences the performance of its investment asset classes, with both global and local factors playing a part.  The South African economy has been negatively affected by local political affairs. The economy moved into a recession with the reported decrease of 0.7% in GDP during the first quarter of 2017, following a 0.3% contraction in the fourth quarter of 2016.  Nevertheless, the property sector has proved to be resilient by outperforming all other investment asset classes over the last 12 months.

2016 saw direct property investment continuing to outperform other investments despite a decrease in ungeared total return (11.1% compared to 13% in 2015).  Income return was stable at 8.3% while capital growth took a knock, falling to 2.6% from 4.4% year-on-year due to higher interest capitalisation rates. 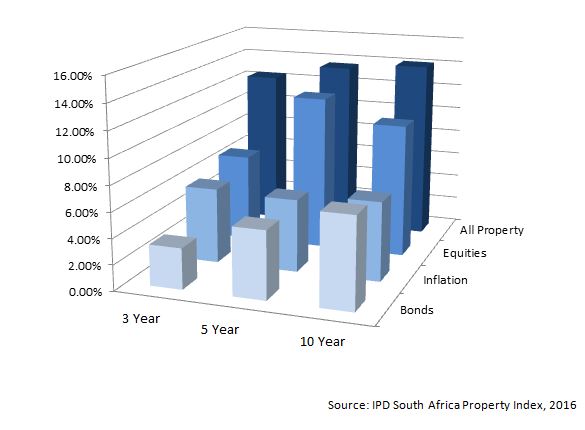 In the commercial property sector, it is noticed that industrial property has overtaken retail property with annual returns of 13.6% and 12.6% respectively. This can be attributed to the global decline of traditional retail malls and the rise of online shopping.  More and more retailers are consolidating their operations or closing their doors while online retail sales continue growing.  This results in an increased need for warehousing and smart distribution centres for online stock.  In terms of the office sector, national returns fell to 7.6% in 2016 from 12% in 2015.

However, the decrease does not come as a surprise due to the low growth environment in the country. On a positive note, during 2016, direct property delivered returns to investors and proved its resilience by showing higher performance when compared to the MSCI SA Equities Index and the Bond Index over 1, 3, 5 and 10 year views.

“The IPD South Africa Annual Property Index provides a unique perspective on the fundamental drivers of commercial real estate returns in South Africa. In stark contrast to socio-political volatility, investors have benefited from stable incomes, founded on the sectors’ contractual income base and aggressive cost management. Even given the decline in total returns, the sector has once again proven its resilience by providing real returns in 2016″. 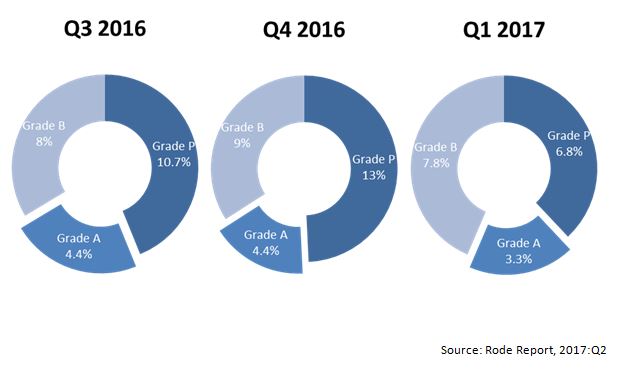 National vacancy rates at the end of Q1 2017 increased slightly to 11.1% compared to 10% at the end of 2016.  Once again, the Cape Town office segment outperformed every other municipality in terms of vacancies.  Cape Town achieved a rate of 7.6% compared to the national average of 11.1%.  According to SAPOA, a constant, downward trend can be seen in the vacancies of P and A Grade offices since 2012 in Cape Town.  This is positive news since all of the properties managed by Horizon Capital are A Grade properties. Broken down further into business nodes, we see an improvement in the CBD (8.5% down from 11.4% year on year) and an improvement in the Waterfront (0.1% from 3.2% last year) as a result of constant development within the area.

In contrast to the national trend, Cape Town is performing well with robust rental rates achieving a year on year increase of 8%, which is in line with standard industry escalations.  This has been driven by Grade A office space, which saw a 9% increase year on year. Rental growth is exceeding the inflation rate representing a stable demand in the market, placing landlords in a very positive position.  The introduction of Grade P offices will drive an increase in average rentals by achieving average rates of R178/m2 and as high as R235/m2, stimulating rental growth. 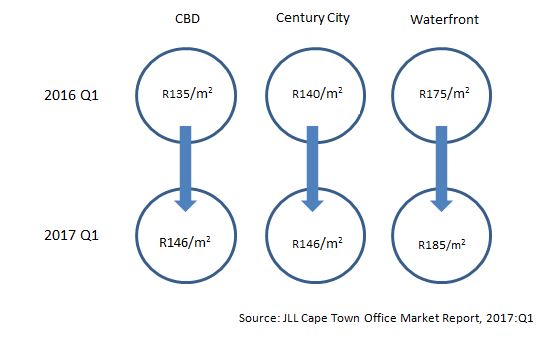 Commercial property proved robust in 2016 and has continued to do so into 2017, especially in Cape Town where both rental rates and vacancy rates performed better than the rest of the country.

Residential property experienced a national price inflation of 5.3% as at June 2016, declining to 3.6% by the end of the year. Prices grew 4.7% year on year as at May 2017.  When compared to the consumer price inflation of 5.01%, this results in a real deflation of 0.31% year on year. With this being said, South Africa is experiencing a growing demand from first time home owners predominantly in Gauteng. According to Ooba loan originators, 53% of all applications are from first time owners who are choosing sectional title over freehold.

Furthermore, the Cape Metro has proven strongest with a property price inflation of 7.9% year on year in Q2 2017. The demand for residential property in the Cape Town area remains strong as the semi-gration movement shows no signs of slowing down.  Purchasers, particularly from Gauteng, are relocating their families to the Western Cape in the hope of living in a safer environment with a high-quality lifestyle.  Semi-gration further stimulates the local economy as businesses are required to serve more and more people, generating additional revenue for the city. 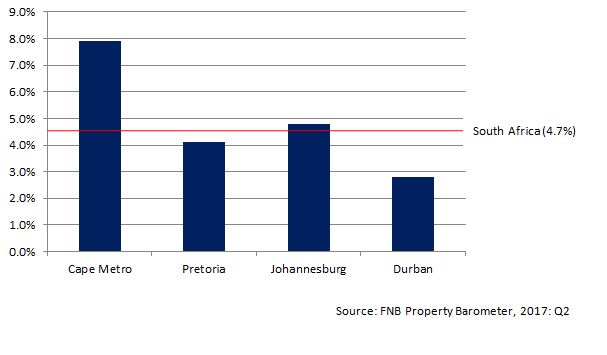 The local property market is proving robust despite economic pressures with demand for high-end properties likely to remain strong. Q2 of 2017 witnessed year on year price inflation of over 29% in The Atlantic Seaboard and City Bowl as a result of both semi-gration and lack of space in these sought after areas. Cape Town buyers seem to be sharing the national sentiment of choosing sectional title properties over freehold due to affordability, security and convenience. Other, more affordable areas in Cape Town also saw growing price inflation in Q2 due to the increased demand resulting from the high price of properties in the Atlantic Seaboard and City Bowl.

With regard to residential rentals, the demand in Cape Town continues to grow, partly as a result of the high property prices becoming less affordable.  Another contributing factor is the shift from traditional, long term letting to short term letting due to the higher rental rates achievable.  Services such as AirBnB make it easy for owners to offer short term rental to tourists who, in turn, benefit from lower prices when compared to traditional hotels.

Despite the tough economic environment in South Africa, the Cape Town property market has remained resilient and has continued to outperform the rest of the country.  Horizon Capital’s decision to offer its clients residential developments in the City Bowl and Atlantic Seaboard has proved a sound one as the units have appreciated well.

We’ve Got Your Back [-up Power!] | BLACK FRIDAY SPECIAL @ Ibis House, Century City