Diversification and the Bath Property Market

Whether one is invested in property, equity or bonds, there is currently an undoubted push to move investments offshore for diversification and protection. There has also been a growing trend amongst South African REITs to raise or retain capital and pursue offshore opportunities. As a result it is estimated that foreign asset exposure amounts to around 23% of the South African Property Index (SAPY).

There are a number of compelling arguments to support a move offshore in the current environment, which include muted economic growth in South Africa, the political climate and rand depreciation. When measured against the current low yields and high borrowing costs of most South African property deals, exploring offshore opportunities has begun to make commercial sense.

As custodians of our clients’ wealth, much research went into the decision for the ideal location for an offshore property investment offering. Consideration was focused on a number of key lessons learnt from the 2008/2009 global recession:

The philosophy of our offshore property diversification for South African clients is based on a number of key principles designed to preserve and grow an offshore asset base.

As many of our clients are already invested in South Africa, which by nature is a high yield, high risk investment environment, diversification dictates seeking out opportunities in countries that have a more stable economic outlook with established political structures. For this reason, the United Kingdom was chosen over the likes of other European countries currently being advertised by many other investment houses.

Within this context, we seek out value propositions which create a margin of safety for the preservation of capital, and ultimately lead to above-average capital growth. This margin of safety, otherwise known as a ‘value gap’, can be exploited by timing the market ideally for acquisitions or a seller’s personal circumstances. This upside can be magnified when supported by an on-the-ground management team with local insight. 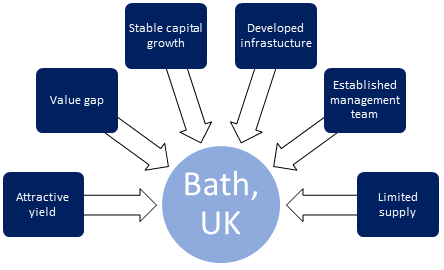 Bath is a beautiful Georgian City situated in the South West of England. As a designated World Heritage Site, the buildings retain their beautiful architecture and substantial new development opportunities are restricted. The Bath railway system is also currently undergoing an upgrade that will reduce the travel time to London from 90 minutes to under an hour. This is likely to result in more Londoners deciding to commute. This lush affluent countryside city meets all the requirements for Horizon Capital’s International service offering.

Bath offers a stable macro-economic background in which to invest, with two world class universities accommodating approximately 25,000 students annually, as well as a thriving tourism industry that attracts in excess of 4 million visitors per year. It’s a city that has historically shown stable long-term capital growth which is less volatile than that of London and currently offers the value-gap that we expect for our investors. The price differential on a square metre basis compared to London is the largest it has been in recorded history, which we believe supports strong growth in Bath as Londoners realise profits and exploit this differential. This has already begun to some extent with 22% of buyers in the Bath property market for 2014 reportedly being London buyers, a 57% year-on-year increase from 2013.

Knight Frank reported that for 2014, they achieved on average 96% of their guide prices. This indicates buoyancy in demand for Bath property as buyers start to compete with one other. Cape Town’s City Bowl and Atlantic Seaboard region have been experiencing similar trends in demand.

A major factor driving the rapid growth in the Bath property market is the redevelopment of its railway lines. Works currently underway include the electrification of the train lines with increased seating capacity in carriages and most importantly, a sharp decrease in the travel time to London. As of 2017, commuters will be able to travel from Bath to London in under one hour. Given that there are Tube commuters living in London who take longer to get in to their offices, the shortened travel times will create an opportunity whereby Londoner’s are able to relocate to Bath and commute to work each day. This will mean that Bath will essentially become a south west suburb of London as opposed to a separate city which will greatly boost its economy.

The old adage “quality over quantity” holds true to our offshore diversification approach in that we are not pure ‘yield chasers’. Considering the long-term nature of property investment, it is vitally important to invest in high quality properties in desirable areas where clients benefit from strong and consistent capital growth on their asset base. That being said, yield is not disregarded when assessing opportunities as we recognise the importance of creating offshore income streams.

Our analysis has indicated that typical gross yields range between 5% and 6%, offering a positive yield gap when compared to lending rates of between 2.5% and 4%. This is particularly attractive when measured against the quality of the asset that one acquires. While some British and European cities are offering yields in excess of this, our view is that these will not provide stable capital growth, putting investors at risk of losing a portion of their initial investment. High quality assets in affluent markets tend to experience superior capital growth and long term stability which is consistent with our offshore property diversification philosophy.

Horizon Capital Holdings is a boutique Property Development, Investment and Corporate Finance House based in Cape Town. We believe in creating innovative services that create and build our clients’ wealth and legacies.

Horizon Capital International Limited (UK) has established an office and team in Bath that is supported by the infrastructure of the Cape Town office, recognising the importance of active asset management to direct property investment performance. The team collectively has in excess of 40 years of experience in Bath, which is key not only to managing our clients’ assets, but also in identifying unique purchase opportunities.

Horizon Capital International’s service offering allows South African investors to purchase UK property in Bath which is held directly by them. The offering includes the sourcing of the property, due diligence, raising of necessary offshore finance, the opening of offshore bank accounts (if necessary), structuring, and active asset management of the investment.

For further enquiries, contact David Sedgwick on 021 425 8586 or dsedgwick@horizoncapital.co.za

The Aster, Oranjezicht – Our Latest Development