In addition it has entered into an agreement to market residential property in Cyprus which qualifies up to three familial generations to residency in Cyprus and ultimately an EU passport.

In last year’s edition we made reference to some of the obstacles that South Africa still had to face over the short to medium term and the importance of positioning a portfolio that was diversified internationally to protect against these.

Over the past year South Africa has faced more political scandals than we could have predicted, from the Gupta e-mail leaks, rampant corruption throughout Government SOEs, the firing of Pravin Gordhan along with multiple cabinet reshuffles as Jacob Zuma’s faction readies itself for an intensive fight for its survival at the ANC Elective Conference later this year. Things are going to get worse before they get better, we remain on a cliff with the key Ratings Agencies and still run the risk of a possible downgrade.

Despite having a number of “shocks” the Rand has held up relatively well against the Pound, partly supported by the uncertainty with regard to Brexit that we feel is now fully priced in.  On the Rand side of the equation we remain of the view that there are a number of risks facing the Rand including South Africa’s pedestrian economic growth, burdensome SOE bailouts coupled with SARS’s under-collection and the ANC Elective Conference.

It is for these reasons that we firmly believe that offshore property exposure remains an important component to an investor’s portfolio.

PwC’s recently published “UK Economic Outlook” had a particular focus on research of the UK housing market. When Brexit was first announced there was uncertainty as to how the property market would respond.  The house prices thus far have not been affected as quickly as expected showing the resilience of the market. There has been a decrease in transaction volumes over the course of the year, which is also largely due to the increase in the Stamp Duty regime on second properties.  What PwC’s research has found, however, is that the London market has been the most severely impacted and will continue to come under pressure into 2018 given the uncertain outlook in this market. This is also driven by the growing unaffordability in this market. PwC’s report concludes that the East and Southern regions, where Bath is located, will continue to perform above the national average, especially along commuter belts.

As illustrated in the below figure, UK house price growth slowed in 2016 from 8.2% year-on-year in June to 5.2% year-on-year in December, averaging 7% for the year.  Despite this slowdown, this remains a healthy return in a low inflation environment. 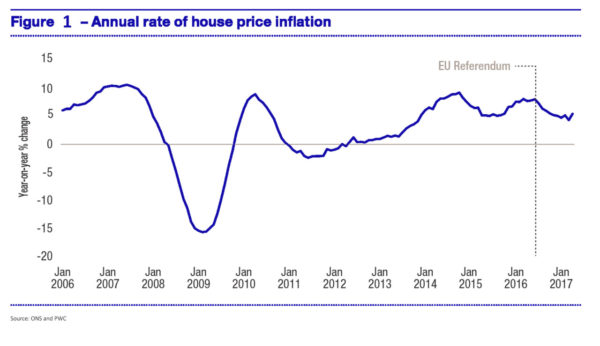 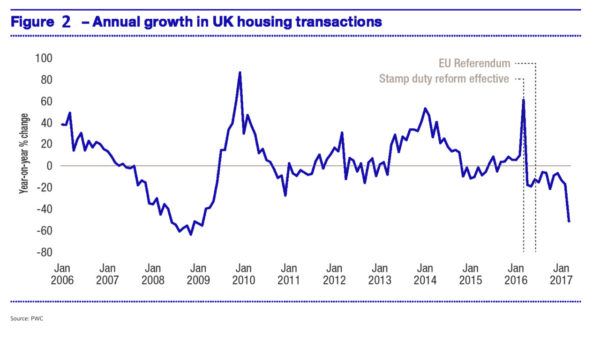 Looking forward, PwC’s medium term forecast is for an average annual growth rate in the UK of 4.1% per annum to 2025. This is above the GDP growth over this period and supported by the structural supply constraints. The London market remains highly volatile and is at risk of further price deflation over this period given that it is the UK’s “most outward-facing region with the greatest exposure to the risks of Brexit.”

Based on PwC’s analysis and data forecasting, they are predicting the South West region to perform the most strongly over the course of the next 3 years to 2020 averaging just under 4.5% per annum based on their “main scenario”. Should a stronger macroeconomic scenario materialise, where forecast earnings rates return to their pre-Brexit projections, a much stronger growth rate could be expected as illustrated in the below graph. 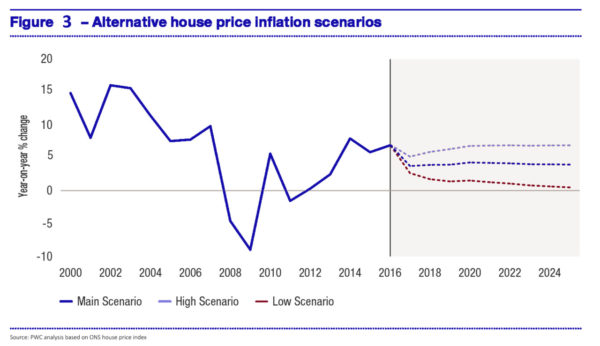 One of the key conclusions in the PwC UK Economic Outlook 2017 report is that “the challenging outlook in London has seen demand, and therefore the strongest house price growth, spill over to towns and cities in the London commuter belt.”

Savills latest Prime London & Country report (published September 2017) confirms this noting in a special piece on migration out of London, that the number of people in their 30’s who have migrated has risen more than 27% in the five years ended June 2016. Their rationale for this is to take advantage of the house price gap, and this has “contributed to the relatively strong house price growth in prime urban markets” such as Bath and Bristol.

This is the trend that Horizon Capital International identified when we first launched our offering in Bath in 2015 and we have witnessed significant capital growth on client properties that have been purchased to-date, far exceeding the national averages quoted by PwC over the period (circa. 8%).

The Bath market has proven its resilience over a long time-span and array of macroeconomic climates and political uncertainty and we remain of the view that, despite Brexit, the market will be well supported from inherent structural demand factors. The structural factors for housing in Bath have been driven by the relative affordability gap between London and Bath, the new high speed train line and infrastructure placing Bath within an easy commute of London, the large expansion plans at the two Bath Universities and limited new development potential given its classification as a World Heritage Site.

The rental market in Bath remains robust and to date we have not encountered a single vacancy across our clients’ portfolios. Rightmove (UK’s largest property portal) reported Bath as the second highest City in terms of annual rental growth from Q1:2016 to Q1:2017, with an average rental increase of 11.67%. This is consistent with our experience at one of our latest acquisitions. We noted a 7.6% rental premium between our budgeted figure / financial analysis on which basis an acquisition was done, and the rental obtained in the lease that was signed post acquisition.

For an investor largely invested in South Africa we would rather bet on diversification with Brexit, than have all our eggs in the Zuma basket.  Contact us should you wish to discuss further how Horizon Capital International can assist you in building an international and diversified portfolio of directly held property. Given the uncertainty currently prevailing in South Africa we strongly advise our clients to continue to favour diversification into first world markets.

The Time to Diversify is Now